What’s the Best Treatment for Warts on the Foot and Toes?

Warts are small growths on the skin that are caused by the human papillomavirus (HPV). People often get warts on their hands, feet, or toes, and they can sometimes last for quite a while.

There are different types of warts, including common warts and plantar warts. Some warts can be painful and can cause embarrassment when they are in conspicuous areas of the body.

Warts are more common in children and young adults, and people with weakened immune systems. Since there are different types of warts, they can occur randomly on different parts of the body. Some warts are harmless and will eventually go away on their own. However, others may be more stubborn or reoccurring and will need to be treated by a specialist.

What are Plantar Warts that Show Up on the Feet and Toes?

Plantar warts are growths that occur on the soles of the feet or toes. They are caused by a virus (HPV) and can be quite painful. A plantar wart on the foot is more common in children than adults.

If you have a plantar wart, you may notice a small, hard growth on the bottom of your feet or toes. The growth may have a black dot in the center, which is actually a clotted blood vessel. Plantar warts can also grow in clusters and spread.

If you have plantar warts, you may notice a change in the way you walk. Warts can also make it difficult to wear certain shoes. While treatment for plantar warts is not always necessary, as warts will eventually go away on their own. That however can take a very long time and if the warts are painful or spreading, our doctors may recommend treatment.

What are Some Common Ways to Treat Warts?

There are many over-the-counter treatments for warts, but not very many of them are effective. Some people choose to try home remedies for warts for one reason or another, but there is no scientific evidence to support the effectiveness of these treatments.

If you have warts, you should come and see one of our doctors. Especially if the warts are painful, spreading, or if you are concerned about their appearance. Our doctors can prescribe stronger plantar wart treatment that is more likely to be effective.

Some treatments for warts include: 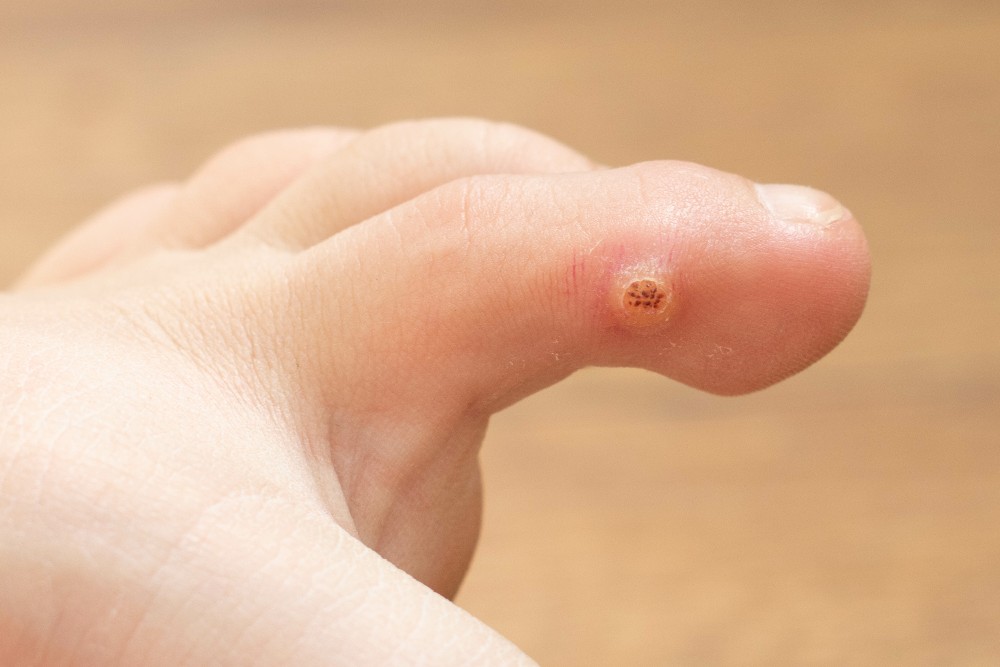 Cryotherapy is a medical treatment that uses extremely cold temperatures to destroy abnormal tissue. It is most commonly used to treat skin conditions, such as warts.

The freezing temperature of cryotherapy causes the destruction of the tissue by forming ice crystals within the cells. This process damages the cell membranes and prevents the cells from functioning properly. The body then recognizes the damaged cells as dead or foreign and works to remove them.

Cryotherapy is a quick and relatively painless procedure. The area to be treated is numbed with a local anesthetic and then exposed to the freezing temperature for a short period of time. There may be some discomfort and redness after the procedure, but this usually goes away within a few days.

Cryotherapy is a safe and effective treatment for warts. It is often used when other treatments, such as over-the-counter medications, have failed. There is a small risk of scarring and skin infections with cryotherapy, but these are usually minor and go away with time.

Topical treatments are available over the counter and by prescription. They work by killing the virus that causes warts.

You may need to apply the topical treatment several times a day for several weeks. The length of time depends on the type of wart and the treatment you use.

Some people experience skin irritation from topical treatments. If this happens, stop using the treatment and call our office.

Surgical removal was the most common way to get rid of stubborn or painful warts in the past. The procedure is usually quick and painless. The area would be numbed and then cut or burn away the wart tissue.

After the wart is gone, the area will be covered with a bandage. The bandage should be left in place for 24 hours. The wound will heal on its own and the scar will eventually fade.

Surgical removal was usually the best option for warts that are large, painful, or in a visible location. It was also the best option if over-the-counter treatments have failed. But now there is a better way to treat warts completely!

Swift therapy for warts is a new, minimally invasive treatment that offers patients a quick and easy way to remove their warts. This new therapy uses highly concentrated microwaves to destroy the wart tissue. The current is delivered through a handheld device put onto the wart. The microwaves are exposed to the wart for a couple of seconds, which destroys the wart tissue.

Swift therapy has been shown to be effective in treating both common warts and plantar warts. The procedure has a high success rate, and warts typically do not return after treatment. Get Rid of Plantar Warts with Swift Therapy!

If you are considering swift therapy for your wart, we encourage you to contact our staff at Family Foot Care & Surgery in Milford and Hamden to learn more about this new treatment option. Since 2003, we have been serving patients of all ages in a relaxed, comfortable, and family-friendly environment.

If you have warts on your feet or toes, you should talk to Dr. Patel about the best plantar wart treatment option for you. Dr. Sanjay Patel is a board-certified foot surgeon with more than 30 years of experience in the fields of podiatric medicine and podiatric surgery. Your well-being is our primary concern.